May saw the start of our winter sports in earnest with our football, basketball, rugby, badminton, table tennis, hockey and shooting teams getting underway while we also sent teams to one day swimming and cross country events.

It is great to see so many of our students playing both a winter and summer code in 2018. A lot of current research coming out of Sport New Zealand supports the argument against early specialisatio.   With the national body pushing for young people to play a variety of sport, no longer endorsing the once-held 10,000 hours myth, we hope to see all boys playing at least one if not more than one sport each year.

Badminton
Badminton numbers at the college remain strong thanks in part to the boys having unrestricted access to the badminton courts at lunch time in the Renner Hall. This has proven to be great way to introduce new players while also honing the skills of those already playing.

The Senior Premier badminton side of Henry Hollis, Jordan Chan, Bevan Cox and Sean McGregor is currently leading the CSW Premier Competition after 4 games with strong wins against HIBS, Scots College and Newlands before going down narrowly to Wellington College. The Senior B, C, D, E and F are also doing well in their respective grades with Senior D team consisting of Liam Iggo, Robbie Spooner, Leo Griffiths and Ben Beardsworth leading Division 3.

This year we have 4 junior badminton teams.  The A side is sitting mid-table in Division 1 after 4 rounds while Junior B, C and D are competing in Division 2. 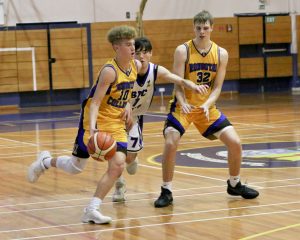 impressive seasons last year. Both teams took part in a preseason round of matches before the season got underway on 26 May. The seniors kicked off their campaign in style with a big win over Hutt Valley High School 103-57 while the Junior A side also won their first game 75-64 against Wellington College. The Senior B side lost a thriller 69-68 against  Onslow in their first match but  Junior B side won their match comfortably 84-17.

While basketball numbers continue to grow, the capacity to offer more teams and opportunities is dependent on being able to resource the teams with parent coaches, managers and drivers.  We thank all those parents who are already assisting in helping these teams.

Cross Country
Rongotai College sent teams to both CSW Cross Country events this month. We sent a 5 strong team of Seb Phillips Archie Purchas, Joel Purchas, Bevan Cox and Abdi Suleiman to the Karori Relay event, which doubled as a practice for the end of month CSW Cross Country Champs. While there were no placings, it’s good to see a lot of these boys use running to benefit their other sports such as rugby and football.

On Wednesday 30 May, our cross country team travelled to Upper Hutt to compete in the CSW Champs. We had 14 boys competing including a strong 7-man team from Tamatoa.  In a fantastic day of racing Rongotai College won the AWD 3-man team and 6-man team events.  Individually, there were 4 top 10 placings including David Anas who came 3rd, Daniel Voresara 6th, Aidan Warrington 8th and Kesh Mistry came 9th in the event. Other notable performances were Bevan Cox who came 14th in the Intermediate field of 86 runners and Yaxye Jama who finished 16th in the senior field.

Football
Congratulations to the 1st XI football side, who are back in the Premier youth grade after missing out on qualification last year. They notched 3 wins and 3 losses in the qualifying rounds. Jesse Randall has been in the goals scoring a hat-trick against Onslow in the 4-1 victory which has been a highlight so far. On Wednesday 30 May, the side travelled to Palmerston North Boys High School in what has now become a traditional fixture in the sporting calendar.  The game was even for most of the match but unfortunately we went down 4-2.  Nevertheless, it was a good experience for the boys and thank you to the parents who transported the boys.

The 2nd XI have qualified for Division 2 after a 4:1 win:loss record while the 3rd XI also had a successful grading round with 3 wins, a loss and a draw indicating that football in the senior school is continuing to build depth. The two senior social teams, the 4th XI and 5th XI, have had mixed results but most importantly are all enjoying their football and playing with their friends.

In the juniors, the 15 Gold side are in the premier grade but have had some tough results so far. The continued pressure from football clubs and academies means that players are often torn between club and school to the detriment of everyone involved. They have lost all four games so far, however the games have been tight with a competitive squad so will only be a matter of time before they experience their first win. We welcome back former head boy Qais Fawzi who is coaching the 15 Gold side and making excellent progress with the young squad.  Another former student, Harrison Bellve, is coaching the 15 Blue side and they have won 3 lost 1 in their 4 grading games while the 15 Black side coached by current students Ben Beardsworth and Steven Raj, have won 4 out if their 5 during qualifying.  It is a pleasure to have these former and current Rongotai students giving back to the school and the game.

The 1st XI have qualified for Premier 1 after finishing 4th in grading and will be a good tough season ahead of their much anticipated return to the premier national tournament Rankin Cup later in the year. Coached by Chris Thornton and well led by Sajan Patel, they look forward to kicking off their season in June.

The 2nd XI is coached this year by two current students Alex Lowcay and Satish Cussins and managed by Jojo Wright. This team has an important role to play in providing an opportunity for those players wanting to play socially and for preparing younger players for the 1st XI. They qualified for reserve 1 thanks to a fantastic 4-1 victory in the must win match against Hutt Valley High School.

Rugby
The Rugby 1st XV finished their grading rounds through May and it is great to see them back in the Premiership for another year. They have started their season with a win and a loss against Wairarapa College 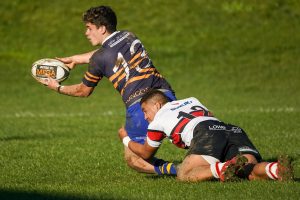 and Scots College 24-22 and 31-23 respectively. The Wairarapa game in particular, was a highlight after coming from behind back with a last minute try and Kayden Muller knocking over a pressure conversion to take the win on the stroke of full time.

The Premier junior rugby side, Rongotai U15, are also in the top grade and although having a tough start to the season will be better for the experience. They have been beaten 38-22 against Scots, 59-0 vs Stream, 105-0 vs St Pats Town and 65-12 against St Pats Silverstream.  Despite this, it’s a credit to the boys and the coaching staff who wish to stay in the top league and work hard to improve results rather than taking the easy option of going down a grade.

Our two other rugby sides, the 2nd XV and U65kgs have had a mixed start to the year results wise but continue to make improvements. The 2nd XV topped their pool after grading after beating St Pats and Wellington College 3rd XV and narrowly going down 24-22 against Scots College 2nd XV. They lost their first competition match against Mana College 1st XV 63-24. The U65kg side qualified for Division 1 and have gone down to Onslow College 38-15 in their first regular season game.

Shooting
This year we are pleased to offer Smallbore Rifle Shooting. Thank you to the Melrose Rifle Shooting Club in Newtown and parent Melissa Raharuhi for making this possible. We have 7 students doing a 6-week programme, which includes target shooting, gun safety and gun care. We hope to continue this again next year and build on the variety of sports available to students at Rongotai College.

Swimming
For the second year in a row Rongotai has entered a team in the Quad Meet after a decade long absence and it is great to see swimming growing in popularity. While all boys did exceptionally well, congratulations go to Jacob Timmins who won the U14 33.3m Breaststroke, Che Pulepule who won both the Senior 33.3m and 66.6m Breaststroke and Sam Brown for his win in the U15 33.3m backstroke. June will see the College Sport Wellington Individual Champs and we look forward to following our swimmers at this event.

Table Tennis
We have 6 Table Tennis teams competing in the College Sport Wellington Competition with only Hutt Valley High School boasting more teams than Rongotai College in the region. The central competition is played on Tuesday afternoons in Newtown and the premier side of Christoph Ertler, Sonny Johnson and Jordan Chan is currently sitting in 4th place in Division 1 at the end of May. The Rongotai 5 side is also a notable mention currently leading Division 3.

Representative
Ezrah Vaigafa and Ben Robertson have also been named in the Wellington Saints side for this upcoming season. Congratulations to both of them on a fantastic achievement. Ezra has also been selected in the U17 NZ Basketball team which will compete in the U17 Basketball World Cup in Argentina in June.

Swimmer Sam Brown had a big NZ Age Group Nationals where he achieved a gold medal in the 400m individual medley and silver in the 400m freestyle against the top swimmers in the country.

We would like to congratulate Josiah Samani and Asuelu Mata’u who have been selected in the U20 and U17 Wellington Volleyball sides respectively.

Evander Tere-Rongotaua has had a fantastic month not only being selected in the NZ U16 Rugby League squad, but also in the NZ U18 Flag Football side.