The major sports story of the last week was our 1st XI Hockey result. Last Friday, Rongotai College continued to turn heads in Wellington Hockey circles after beating Paraparaumu College 4-2 away from home to book an automatic spot in the Wellington premier final, to be played next Friday 24 August. This is a really exciting time for hockey at the school, so let’s train hard and prepare properly in the lead up to next week’s Grand Final. 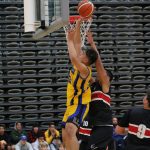 scoring for Rongotai with 20 points. They play rivals St Pat’s Town tonight at the ASB, and will have to play at a higher level throughout the game than they did last week if they want to avenge their loss to St Pat’s earlier in the season.

The Junior A basketball side went down to Scots College 96-78 in the final game of the regular season but now have a re-match against the same opposition after qualifying for the semi-final this coming Tuesday at the ASB Centre. Congratulations to our Junior B side who won comfortably against Northern Zone champions Mana College 73-28 to book themselves a place in the Regional Final of the Junior boys 6th division next week.

In football news, the 1st XI came back from 3-1 to draw 3-3 all against HIBS on Saturday with goals to Jesse Randall, Fergus Jobson and Shaun Lane-Turnbull. The 15 Gold side notched their first win of the season after coming close so many times with a 4-3 win over Wellington College 2 in the junior premier division.  Well done!

In rugby, the 1st XV finished their season with a strong 41-19 win over Kapiti College to finish the season in 7th place in the Wellington Premiership.

Last Friday, Rongotai entered two teams in the Wellington Regional Team Table Tennis championships. Our A team of Jordan Chan, Dylan Jackson and Sonny Johnson came 5th in Division 1 while our B side of David Mitchell, Darnell Poe and Jack Moore came 3rd in Division 2.

Any junior boys wanting to do some pre-season training for water polo are encouraged to go to the WRAC on Monday’s from 7-8am for training. This will continue until the end of term and serve as pre-season training prior to the competition getting underway in Term 4.

Congratulations to Sam Brown who has had a huge week after being selected for both the NZ Swimming High Performance Youth training squad and the NZ U15 Water Polo squad. This is a fantastic achievement.

Congratulations also to Lachie Reddish who has been selected in the NZ U14 Water Polo squad.