Kevin Carter has been Principal of Rongotai College since the beginning of Term 2, 2009. He 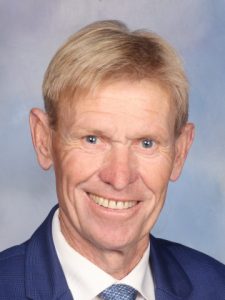 succeeded Mr Graeme Jarratt, who led the school for the previous 17 years.

Mr Carter is a graduate of the University of Auckland, holding a Master of Arts (Hons) degree in Geography, and received a Diploma of Teaching  after studying at Auckland Secondary Teachers College.

Mr Carter’s teaching career commenced at Auckland Grammar School in 1984, and he remained at that school until 2000, rising through the ranks to become Head of Geography (1991), Head of the Social Science Faculty in 1997, and Director of Information Technology in 2000. Highly regarded as a Geography teacher, Mr Carter was involved in the external examining of students throughout the 1990s, and he co-authored four Geography texts used extensively in New Zealand schools.

From 2001-2002 Mr Carter held the position of Assistant Principal at Napier Boys’ High School with major responsibilities for student management, prior to his appointment at Tauranga Boys’ College, a school of 1800 students.

At Tauranga Boys’ College, Mr Carter was the Deputy Principal (Learning), with responsibility for Curriculum and Assessment. He held this position from 2003 until his arrival at Rongotai College.

While missing teaching in the classroom, Mr Carter nonetheless maintains a passion for teaching and has a simple educational philosophy – a commitment to the achievement of excellence. For students to achieve this, Mr Carter believes the school must be an environment where expectations to excel and managing self are paramount, where learning relationships are constructive, and values are highlighted. These are  aspects that he has emphasised in his time at Rongotai College.

Mr Carter has an interest in most sports and has coached extensively across a range of sports in all the schools with which he has been associated. Highlights of his coaching were coaching a number of young men who have gone on to represent the All Whites, the two years he spent as Assistant Coach of the New Zealand Secondary Schools Football team and, as head coach, his teams twice winning the New Zealand Secondary Schools Premier National Football Tournament.